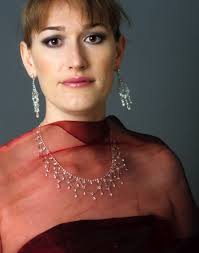 Erica Eloff is a South African soprano specializing in opera, lieder and oratorio, currently residing in England. She made her professional debut in the UK during the summer of 2008 at Garsington Opera as Fiordiligi in Mozart’s Così fan tutte.

Over the last few years, soprano Erica Eloff has steadily built her career on the concert platform to become a sought after soloist and recitalist.

Praised in the media for her vocal authority and technical control, and a voice that is bright and well-produced across its range with great power at the top, she is a passionate and deeply musical performer.